INTERNATIONAL SYMPOSIUM ON SOCIOLOGY OF RELIGION

Sociology of Religion that aims to understand the mutual interaction between religion and society has been going through important intellectual and organizational experiences for a long time. Research in this field has brought about a great interest as well as discussions. All these are a sign indicating that Sociology of Religion is heading towards maturity from being a young discipline, following a rapid improvement graph as an exciting discipline in Turkey. Among the reasons that Sociology of Religion has become the focus of interest, developments that took place particularly in social and political arena after the second half of the 20th century have a huge impact. It gave rise to the transformation of the understandings of religion and of reflections of religion in social life, resulting in a shift in the influence and prestige of religion in social sphere. All these developments have led to the study and discussion of subjects such as the position of religion in life, differentiation of the perceptions of religiousness and influence of religious groups at social and political levels. Thus, it needs to be emphasized that ‘religion’ comes to the fore among institutions examined by social scientists aspiring to understand with all these aspects the transformations societies have undergone, and that the discipline of Sociology of Religion has assumed a very important duty in this regard.

In Turkey, Sociology of Religion has a distinguished place as it is formally established as a Department within the Faculties of Theology and is one of the compulsory courses included in the curriculum of these faculties. However, it will not be a proper and realistic approach to limit the studies of this discipline just to the studies of academics in the Departments within the Faculties of Theology. That is because it is known that academics in different departments and those who are not connected with any university are also conducting important studies in this field. In this respect, the planned “International Symposium on Sociology of Religion” is expected to be a platform that academics and professionals studying in this field come together and share their studies conducted using different scientific methods, and experienced lecturers convey their experiences to the young generation while the challenges of the discipline are discussed at the same time.

Therefore, we invite researchers interested in “International Symposium on Sociology of Religion” to be held with the contributions of Aksaray University and the Journal of Conservative Thought on May 10-12, 2018 hoping that it will contribute to the development of the discipline and to the interaction between academics studying in this field. 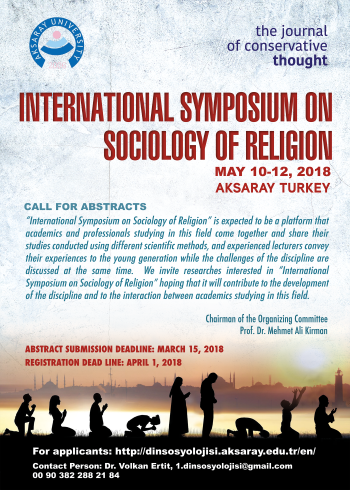